Is it the Culture, or Employees? That is the Question! 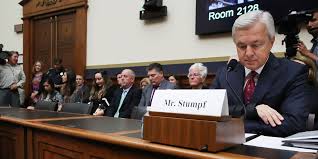 The Wells Fargo scandal is an interesting case study that presents the question, did the employees cause it, or was it the culture?  On one hand, the CEO indicated the scandal happened because of employees.  On the other hand, it appears that employees responsible for sales were under duress because of extreme demands.

CNN interviewed Susan Fisher, a past branch manager at Wells Fargo who was terminated by the Bank. Fisher refused to comply with directives from her district manager who instructed her to improve results by any means necessary.  According to Fisher, the stress that was placed on her by the “pressure cooker culture” fueled by unrealistic sales goals led to her health problems and subsequently, termination.

When asked about the circumstances surrounding the opening of over 2,000,000 fraudulent account, Wells Fargo’s CEO, John Stumpf responded saying, "I recognize we could have done more earlier. I try to lead with courage and conviction, but of course we make mistakes."

Wells Fargo terminated more than 5000 employees who opened unapproved (fraudulent) accounts in response to what employees viewed as extreme sales targets, CEO John Stumpf told the US Congress and other national stakeholders that, “The problem was an ethical lapse among 5,300 employees, most of them low-level bankers and tellers, who have been fired for their actions since 2011.

John Stumpf’s response to this debacle did not even acknowledge the perceived, unrealistic sales goals established by key decision-makers (like him), combined with the intense demands to comply.

In structured, medium to large organizations, the Board and executives are the architects of culture. Boards are responsible for governance and strategic direction and the executive team is responsible strategic planning and execution. These two internal stakeholders are also ultimately responsible for ensuring compliance with policies and systems.

When ownership of the state of the culture is abdicated by the cultural architects and measures are taken by distressed employees who do not have the will to fight an overwhelming culture that marginalizes employees who dare to challenge the unethical demands of senior management and executives, it is conceivable that wholesale fraudulence can occur. Fraudulent behavior and cover-up usually work hand-in-hand so that a false appearance of success can be sustained.

So let’s take a look at how this type of culture self-sustains.  One path is through reward and punishment. In the Wells Fargo case, persons who met or exceeded targets by any means necessary were initially rewarded and those who challenged the integrity of the system were punished, sending a clear message to employees thinking about taking a stand.  Hence more than 5000 persons who were initially rewarded, were eventually penalized for fraudulent behavior and only dozens of persons were terminated for exposing the non-compliant practice.

Unethical practices tend to be exposed eventually because principled persons who have the courage to stand up will expose unproductive systems of behavior to executives and if this backfires, they either shut down and leave the organization or they take their mission further by alerting regulators or the media. Sometimes notifying external stakeholders is necessary because dishonest practices can be so deeply embedded at multiple levels within a company.

According to the Wells Fargo website, their core values are: People as a competitive advantage, ethics, doing what’s right for customers, diversity and inclusion and leadership. It is clear that these espoused values are not integrated within all the interactions at Wells Fargo.  Even though there are claims there are many who did not participate in the unlawful practice of opening unapproved accounts, the question arises, were they aware?

Most times when employees within a culture are blatantly ignoring the rules, it is because the executive team is driving the behavior, either directly or indirectly.  So how does a situation like this get cleaned up? This is a complex system because it was apparently an expected, accepted practice. There are several ways this type of dynamic can begin to be remedied, starting at the Board level:

Legislators and regulators have low tolerance for the “Anything goes” attitude of large institutions that should be protecting their clients. The next step is for Boards in situations like this to define the culture it wants to create, identify the new competencies a CEO should exhibit in order to turn around and restore confidence in the Bank.  Ultimately, creating shareholder value drove the fraudulent practices, now, other stakeholders need to be equally considered.  Namely employees, and clients who, in this case, have suffered because of unethical practices.

In a turn-around situation like this, employees need to become a higher priority because they are the persons who will help rebuild the brand which is tied to confidence in the organization.  While training in ethics is clearly necessary, it should not be the first step. Instead, a deeper dive into leadership, core values, formal and informal reward systems and strategic imperatives need to happen. This is hard to achieve with a CEO who blamed the staff for the company’s missteps.

So to answer the question, Is it the culture or employees, let me put it this way.  Leaders are the primary architects of culture. They decide which behaviors are accepted and which ones are not, which rules get followed and which ones do not, who gets rewarded and who does not. These practices form and sustain the norms within a culture and consequently, cause employees to do what they do in a certain way.